Hypotension after Myocardial Infarction (MI) points to a usually very serious complication. It is not easily reversible. We present a case of elderly male who presented with ST elevation MI in inferior and anterior leads who got a Left Anterior Descending Artery (LAD) and Right Coronary Artery (RCA) stent. Soon thereafter he went to a near sinus arrest, which eventually completely recovered.

This is a 86 year old male with history of hypertension, and ventriculoperitoneal shunt for hydrocephalus presented with chest pressure since two hours. Emergency Medical Services (EMS) were called in by family who brought him to the Emergency Department (ED). In ED, he was found to have ST segment elevation in anterior leads (Figure 1). He was rushed to the cardiac catheterization lab. Extremely tortuous vessels were noted. There is severe Coronary Artery Disease (CAD) with 60% LMCA (Left Main Circumflex Artery) occlusion, 100% mid LAD occlusion and 95% proximal RCA occlusion. Bare metal stents were deployed to LAD and RCA. Although two lesions were found, the culprit lesion was thought to be LAD. Patient was transferred to the intensive care unit after the cardiac cath. One hour after arrival, patient developed severe hypotension and bradycardia. Patient’s Blood Pressure (BP) was approximately 45/20 mm of Hg and Heart Rate (HR) in the 30-40 beats per minute. Patient was given two liters of normal saline bolus and vasopressors with nor epinephrine were initiated after an emergent right internal jugular central venous catheter was placed. Patient developed severe bradycardia and 1 ampoule of atropine was administered. Transcutaneous pacing was initiated. A repeat Electrocardiogram (EKG) was done at this time (Figure 2), which shows a paced rhythm with atrial and ventricular pacing. Cath lab team was called in to evaluate the patient. Patient’s BP and heart rate slowly improved over the next few hours. EKG repeated at this point (Figure 3) showed normal sinus rhythm with rate at 66 beats per minute and marked ST elevation in anterior leads. Angiographic control was initially planned but repeat EKG’s showed only anterior wall injury and the sinus arrest type picture is improved already. Since patient is improving and extremely tortuous vessels make extremely difficult and risky case, plans for angiographic control dropped. A 2D-Echocardiogram at this point showed ejection fraction of 55% and apical akinesis, inferior wall hypokinesis. No prior echocardiogram was done before the cardiac cath. Patient had even more improvement in BP and HR. He was weaned off all vasopressors completely in the next 6-8 hours. He stayed in ICU for the next 24 hours and was transferred to the telemetry floor. He was discharged from the hospital to a rehabilitation center a week later. 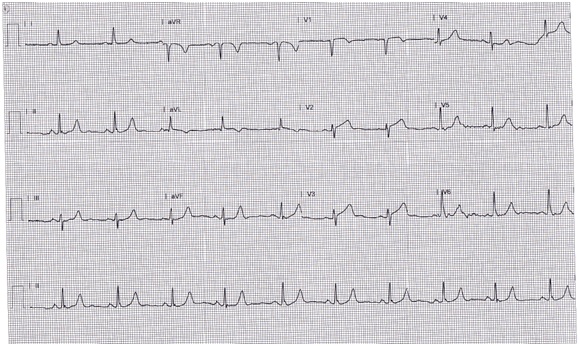 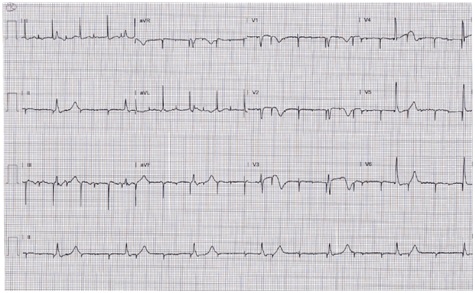 Figure 2: EKG during the event. 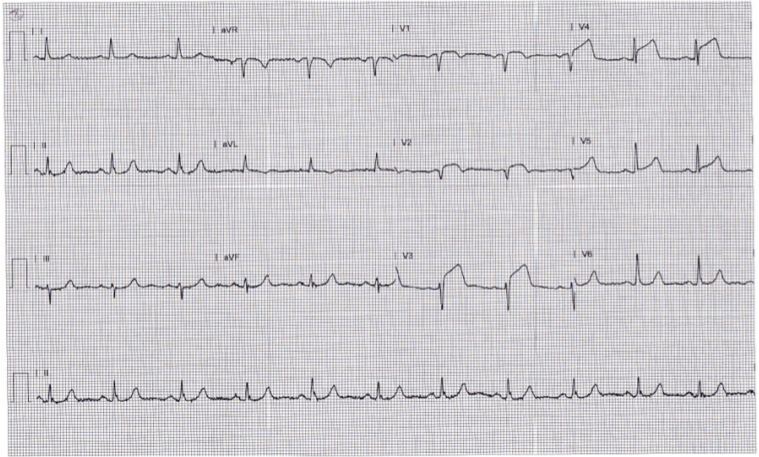 The immediate onset of severe hypotension and bradycardia points towards some sort of a sinus arrest. The transient nature of it especially after having a proximal RCA stent makes us think of coronary sinus occlusion by the stent causing sinus arrest. Since the coronary sinus and its feeding vessels branch off very proximally of RCA and the stent being in close proximity causing occlusion. With time, the profile of the stent may have yielded and perfusion to the coronary sinus is restored causing reversal of the sinus arrest. Sino-atrial nodal artery occlusion is not proven by angiogram since doing the procedure is thought to be risky in extremely tortuous vessels during acute phase and patient’s hemodynamics improved quickly. Sinus arrest after RCA stent has been described in the past [1]. Sinus node artery occlusion causing sinus node dysfunction after RCA stent placement has also been reported [2]. Severe bradycardia, hypotension or vasovagal reactions can occur during coronary angiography while injection of ionic contrast into RCA [3]. Our patient could have a sick sinus disease at his age thus making him more prone to the sinus arrest. Nearly third of sick sinus syndrome patients had a normal 1:1 Sino- Atrial (SA) nodal conduction when measured with SA nodal catheter [4].

We believe our patient had a coronary sinus occlusion limiting the perfusion of SA node causing this fatal hemodynamic instability from a sinus arrest. It was transient in nature because of the yielding of RCA stent profile and becoming more malleable restoring circulation to the SA node with reversal of the symptoms. We recommend keeping in mind of this rare but treatable complication after RCA stent.

Copyright: © 2016  Sundara Kesiraju, et al. This is an open-access article distributed under the terms of the Creative Commons Attribution License, which permits unrestricted use, distribution, and reproduction in any medium, provided the original author and source are credited.