The importance of providing a controlled environment for research studies involving animals has long been understood. Housing and facility conditions are regulated to promote animal health and welfare, and reduce variability in experimental data. When performing behavioral studies on substance use, it has previously been shown that vibration or loud noise can serve as environmental stressors and alter drug intake. In a recent study by our laboratory, we observed that methamphetamine self-administration in young adult male rats was increased in the presence of intermittent vibration caused by heavy construction nearby but external to the research facility. More specifically, drug intake was significantly reduced on the initial day of exposure to the vibration, but was elevated over subsequent days such that at the end of the study, vibration-exposed rats had self-administered more drug than rats who were maintained under stable conditions. These findings further illustrate the effects that environmental disruption can have on experimental results, and particularly indicate that vibrations originating from sources outside of the research facility can still significantly impact experimental outcomes.

It is known that drug-taking behavior can be influenced by a user’s physical and social environment, as well as their history. When using animal models in the study of substance use, changes to the microenvironment of the cage (i.e., access to food and water, bedding, number of animals housed per cage, air exchange, enrichment) or the macroenvironment of the vivarium (i.e., light cycle, humidity, temperature) may affect experimental outcomes [1]. Ambient noise and vibration levels are also a concern, and must be taken into consideration when designing facilities and conducting experiments as noise volumes in excess of 85 decibels have been shown to affect behavioral and physiological outcomes including fertility [2] and adrenal weight [3]. Rodents are also sensitive to ultrasonic sounds, which at high frequencies can affect locomotor behavior [4]. Likewise, vibrational stimuli of varying duration, intensity and frequency that originate from within the vivarium or from external sources can modify animal behavior and biology [5,6] and should thus be minimized as much as possible. A recent study [7] has provided evidence that even anesthetized rodents may be subject to the effects of vibration.

Numerous studies have used loud noise as a stress stimulus, and demonstrated increases in stress hormones such as epinephrine and cortisol that are then implicated in the manifestation of stress-associated physiological disorders [8]. Whole-body vibration can alter autonomic and neuroendocrine responses to stress, by increasing the limbic secretion of factors that regulate hypothalamic-pituitary function such as vasoactive intestinal peptide [9] and substance-P or neurotensin [10]. In a separate study, whole-body vibrational stress decreased norepinephrine levels in whole brain as well as in the hypothalamus and hippocampus [11]. Fewer investigations into the effects of noise or vibration on drug intake have been published. However, one study found that conditioned place preference to MDMA (3,4-methylenedioxymethamphetamine; “ecstasy”) was enhanced by exposure to noise in rats [12]. Paradoxically, loud noise was shown to enhance MDMA-induced toxicity in nigrostriatal dopaminergic terminals in mice [13], and the combination of Methamphetamine (METH) and loud noise in mice has been shown to increase the number of seizures and the amount of reactive gliosis in the brain compared to METH alone [14]. In summary, the ability of vibration or noise to serve as stressors in animal studies is clear and the eradication of these stimuli is critical for effective experimental design and analysis. This is especially true in studies where stress is applied as an independent variable or measured as an outcome of the experimental design.

We recently conducted a study on METH Intravenous Self-Administration (IVSA) in young adult male rats, with and without prior exposure to restraint stress. At the time of behavioral analysis for one cohort, a large construction project was initiated on our campus outside of the building in which the animals were housed and tested. While efforts were made to minimize the impact of the noise inside our facility, the intermittent vibration and changes in noise levels induced by the use of heavy machinery became a concern once the construction began. Indeed, observation of the animals in the IVSA chambers allowed us to qualitatively determine changes in behavior that occurred as a consequence of the environmental disruption. Overall, locomotor activity appeared to increase in the rats compared to that seen in previous cohorts tested prior to construction onset. This enhanced locomotion likely increased lever pressing in total, however, with the rats displaying less discrimination between the active (drug-delivering) and inactive (no reward) levers.

A subsequent quantitative evaluation of performance yielded the results shown in figure 1. Young adult male rats that were given access to METH IVSA during the construction period did in fact show significantly different numbers of presses on the active lever compared to rats of the same age and sex who were not exposed to construction. On day 9, when construction was initiated and the intermittent vibration and noise stimuli began, exposed rats showed diminished active lever pressing compared to rats from an unexposed cohort tested previously under stable conditions. Subsequent testing on days 14, 15 and 18 of the IVSA protocol, in contrast, showed significantly increased active lever responding in the rats exposed to intermittent vibration, compared to non-exposed rats which displayed consistent reductions in their active lever pressing. Normally, reduced active lever pressing is seen over time as the rats learn to press when drug is available (cue-induced) as opposed to pressing during the time-out period when no drug will be delivered. In the intermittent vibration cohort, however, the opposite effect was observed. Rats exposed to vibration had reduced locomotor activity and made fewer presses on the active lever at the start of the construction, but subsequently showed increased locomotion and increased lever pressing on both the active and inactive levers. While this response was not one that specifically induced a higher degree of drug seeking, as inactive lever presses failed to yield any reward, these rats did receive increased amounts of drug throughout the study. These results demonstrate that behavior was markedly affected by the intermittent vibration experienced by the “construction” cohort, leading to increased drug intake. Furthermore, the experience of a secondary stress in the form of vibration or noise after a pre-conditioning restraint stress significantly altered locomotor and drug taking patterns in our animals. Our data is supported by recent findings from another institution, in which construction occurring in close proximity to an animal facility was shown to alterrenin-angiotensin system activity and stress hormones at multiple levels of the hypothalamic-pituitary-adrenal axis [15]. In addition, stress history and novel environmental conditions have been shown to be predictive of patterns of METH taking in rodents [16]. 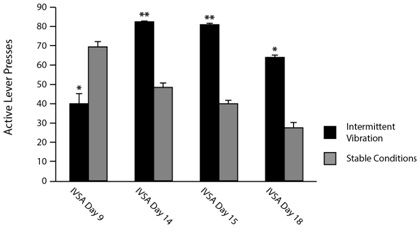 All rats were exposed to an acute restraint stress of 30min duration and surgically implanted with in-dwelling jugular catheters prior to IVSA, and had been in the METH acquisition process for 8 days before construction began on day 9 for one cohort (Intermittent vibration; Dark bars). The comparison cohort of rats (Stable conditions; Light bars) was handled similarly but not exposed to construction and completed the IVSA protocol without disruption. Bars represent average ± SEM; n=3 per group. Significance was determined by paired t-test; *p<0.05, **p<0.005 compared to the “Stable Conditions” cohort.

Together, these observations underscore the impact that different types of stressors and the timing in which they are experienced can have on drug intake in animal studies, and highlight the importance of environmental stimuli in experiments of this type. Translating these findings to human drug use behavior will require further studies, but stress has been established as a contributing factor to relapse as well as the development and persistence of addiction in humans, as reviewed recently [17]. Environmental stimuli in increase stress, especially when experienced sequentially with limited time intervals in between them, may increase drug use or the risk for addiction in humans as well as animals.

This work was supported by the Vulnerability Issues in Drug Abuse (VIDA) Project (NIH/NIDA R24 DA029989), the Border Biomedical Research Center (BBRC; NIH/NIGMS G12 MD007592), and the SMART MIND program (NIH/NIDA R25 DA033613). Additionally, we would like to thank Jameel Hamdan for his work on the project, as well as the BBRC Biomolecule Analysis and Genomic Analysis Core Facilities and the UTEP Laboratory Animal Resources Center.

Copyright: © 2016  Kristin L Gosselink, et al. This is an open-access article distributed under the terms of the Creative Commons Attribution License, which permits unrestricted use, distribution, and reproduction in any medium, provided the original author and source are credited.