Alterations of skin barrier function affect quality of life and there is a need to develop dermatological/cosmetic treatments to reinforce or restore it. Inspiring of Hailey-Hailey disease, in which barrier alteration is due to a mutation of a Calcium-transporting protein (ATP2C1), we focused on the role of minerals and more especially those contained in Saint-Gervais Mont Blanc (SGMB) spring water to reinforce barrier function. Objectives: Demonstrate the interest to enrich SGMB spring water with manganese to improve both keratinocytes differentiation and barrier function.

Conclusion: These results highlight the interest to enrich SGMB spring water with manganese to boost keratinocytes differentiation and barrier function.

The skin is the most important organ of the body protecting us from external pathogens (Bacteria, fungi, yeast), environmental threats (UV light, chemical) and having also an important role in thermoregulation of the body and the reduction of water loss. The barrier function of the skin is extremely important and is a key player in innate immunity [1]. That is why one of the skin first response after an injury is to restore barrier function [2]. Alterations of skin barrier function are observed in several dermatosis like psoriasis, atopic dermatitis, Hailey-Hailey disease, and the severity of these diseases is associated with the degree of degradation of the barrier function [3-4]. An increase of water loss is also observed with aging, due to skin structure changes as thinning of epidermis and dermis [5]. Environmental stressors (pollution, climatic changes, lifestyle, light exposure, smoke) induce also premature skin aging with alteration of skin barrier function [6]. All these diseases seriously affect the quality of life. These patients may complain of itching or appearance, which may be a social distress to patients’ lives. Thus, there is a need to develop skincare treatments to restore or to reinforce barrier function, which is key for the maintenance of skin health. For some of diseases, barrier alteration is the result of an inflammation status involving or not microbiota [7-8]. Thus, clearance of skin inflammation is often at the center of therapeutic strategy and there is no very efficient solution able to improve directly barrier function [9-11]. We are thus facing to an absence of efficient therapies to treated non inflammatory-induced default of barrier function as observed during skin aging or in the Hailey-Hailey disease. In addition, it is not so clear today how a barrier function default could be a trigger for an inflammatory-induced dermatosis as psoriasis or atopic dermatitis [12]. Thus, even in this case, although a repair of the skin can be observe with anti-inflammatory treatments, a treatment able to improve barrier function could make sense as preventing treatment [13].

In the Hailey-Hailey disease, the alterations of skin integrity (blisters and erosions) are not due to inflammation but due to a default in calcium homeostasis caused by a haploinsufficiency of a Calcium-transporting protein (ATP2C1 for Calcium-transporting ATPase type 2C member 1) resulting of a mutation of ATP2C1 gene [14-16]. ATP2C1 is An Adenosine Triphosphate (ATP)-powered calcium pump, which uses energy from ATP molecules to pump charged calcium atoms (calcium ions) across cell membranes but also manganese. Based on the effect observed in HHD when ATP2C1 is deficient, we hypothesized that inversely, by stimulating ATP2C1 expression/activity we could have a novel way to reinforce barrier function and skin quality. Interestingly, this transporter do not vehicle only calcium but also manganese (Mn2+). If the role of calcium in epidermis differentiation and barrier function genesis is well describe [17], the effect of Mn2+ is less clear. Although some studies show the role of manganese in the skin, none of its effects is linked to barrier function.  Manganese is a co-factor of many enzymes in the skin as manganese superoxide dismutase (MnSOD, SOD2) which is the main antioxidant enzyme in the mitochondria. A deficiency of SOD2 is described in aged skin and more particularly in dermal compartment [18]. Additionally, a default of manganese metabolism is associated with abnormal wound healing [19]. Manganese is involved in extracellular matrix synthesis/remodeling by activating prolidase, involved in collagen production and by activating enzymes involved in glycosaminoglycans synthesis such as manganese-activated glycosyltransferase [20,21].

Saint-Gervais Mont-Blanc thermal spring water is naturally strongly mineralized with high rates of calcium and other minerals like manganese, boron and zinc (Table I) and recognized since 1996 by the French National Academy of Medicine for its healing dermatological properties [22]. The thermal center receives patients for the treatment of psoriasis, eczema, burn scars, etc. The composition in minerals of Saint-Gervais Mont Blanc thermal spring water contributes to its benefits. Calcium is well known for being one of the key factors controlling keratinocytes differentiation and the formation of the skin barrier. Boron is known to have benefits on the skin healing process and Chebassier, et al. have presented the stimulatory effect of manganese and boron on keratinocytes migration [23,24]. The benefits of this thermal water and the crenotherapy, treatment developed in Saint-Gervais Mont Blanc thermal center on scar sequelae following burns, had been presented in the review “La Presse Thermale et Climatique” in 1964 [25]. Since, a clinical study had been performed on 106 patients presenting dermatological problems and having undergone a crenotherapy. Each kind of lesion was evaluated with specific and validated scoring systems (The inflammation / Surface / Structure for patients with scars, the Psoriasis Area Severity Index for patients with psoriasis and the Score of Atopic Dermatitis for patients with eczema). Overall, an improvement was noted for at least 98% of patients. All these results show the interest of SGMB spring water for dermatological problems and motivate us to explore its mechanisms of action on the skin barrier repairing and to explore how manganese could improve the efficiency of this spring water. We already know that in vitro SGMB spring water induced keratinocytes differentiation (data not shown) but we assumed that this effect is mainly due to the high content of calcium which is the main mineral compared to other  like strontium, boron or manganese (Table 1). As manganese is transported by ATP2C1, like calcium, we hypothesized that it could have a role in keratinocyte differentiation, hence the belief to enrich SGMB spring water with manganese-gluconate. Thus, the objective of this work was first to determine how Mn2+ could affect the expression of ATP2C1 at the transcriptomic level and also to determine, at least, how Mn2+ could enhance calcium efficacy on the induction of keratinocytes differentiation. By this way, we could have some indications on the role of Mn2++ on calcium homeostasis and keratinocytes differentiation and first indications on the interest of Mn2+ in a therapeutic strategy. Beyond HHD, increasing calcium efficacy and increasing barrier function is important for other skin diseases (Wound healing, psoriasis, atopic dermatitis) and also important in cosmetic to prevent skin aging.

Manganese gluconate (Mn-GLC) tested at 20 µM and 50 µM inhibited in a concentration dependent manner ATP2C1 expression in keratinocytes from both donors (18 y/o and 41 y/o) cultured in low calcium concentration (Figure 1). This effect was less clear in presence of calcium. This inhibitory effect was observed only in the young donor (18 y/o) and mainly in presence of 0.8 mM of calcium (Figure 1). Regarding the own effect of calcium on ATP2C1 expression, no clear effects were observed on both donors (Figure 1). 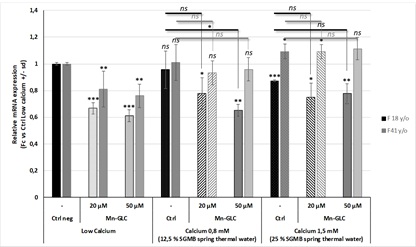 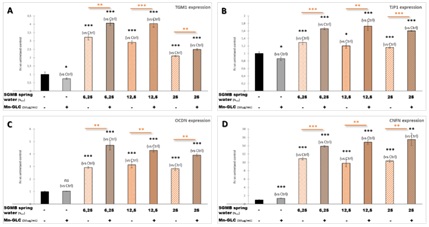 To reinforce our first observations on the effect of Mn-GLC on the calcium-effect potentiation, the expression of transglutaminase 1 (TGM1) was measured at the protein level. In these conditions, both SGMB thermal spring water at 5% and Mn-GLC at 10 µg/mL did not increased significantly TGM1 expression by human keratinocytes while a clear stimulation was observed with the combination of both (Figure 3). The effect of the combination tended to be higher or at least equivalent to that of 1.5 mM CaCl2 used as pro-differentiating reference. 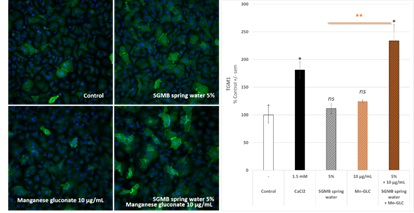 The skin barrier function is extremely important; it is the first bulwark of protection of the body against external aggressions. As such, the barrier function is an integral part of innate immunity [1]. To help the skin to repair it after an injury or in response to a dermatosis (i.e., psoriasis, atopic dermatitis, HHD) is capital as well as to reinforce barrier function to maintain the health of the skin and thus the health of the organism is key. Today, clearance of skin inflammation is often at the center of therapeutic strategy and there is no very efficient pharmacological treatment targeting keratinocyte differentiation and barrier function enhancement [9-11]. Even if by inhibiting inflammation, a quick repair of the skin is observed in main cases, anti-inflammatory molecules are non-efficient on others pathologies such as ichtyosis, Hailey-Hayley disease or non-efficient on some skin behavior where the involvement of inflammation is not so clear (i.e., skin aging). Today, thermal bath using thermal spring water is mainly used to treated skin diseases and the interest of Saint-Gervais Mont Blanc thermal water for dermatological problems and the crenotherapy [16], treatment developed in Saint-Gervais Mont Blanc thermal center, was demonstrated in a clinical study performed on 106 patients. Some of these effects were related to the composition of this thermal water. SGMB thermal spring water is naturally and strongly mineralized with high rates of calcium, sulfates and other minerals like manganese, boron and zinc (Table 1). It was demonstrated that manganese, boron and zinc stimulate the wound healing process by stimulating keratinocytes migration and proliferation by acting on the expression of some integrins [24,26-30].

This research received no external funding.

We are thankful to our colleague Jean Baptiste Galey who helped us to review the article.

The authors declare no conflict of interest.

Copyright: © 2021  Franck Juchaux, et al. This is an open-access article distributed under the terms of the Creative Commons Attribution License, which permits unrestricted use, distribution, and reproduction in any medium, provided the original author and source are credited.