The technique of peripheral arterial catheterization used for hemodynamic monitoring is commonly applied in clinical practices. The catheter is often cannulated into the radial artery, and complications may occur during the catheterization [1,2]. Reported complications were temporary occlusion of the radial artery, and the formation of hematoma or bleeding at the puncture sites. Less commonly found complications include the formation of pseudoaneurysm, abscess, cellulitis, injury of the median nerve, suppurative thrombarteritis, air embolism, compartment syndrome and carpal tunnel syndrome [1]. Here, we reported a rare case with damage to the catheter in the radial artery during removal.

This 87-year-old male patient was diagnosed sigmoid colon cancer and hwas admitted to receive anterior resection. Because of his old age and past history of uncontrolled hypertension, a 22-gauge cannula (BD Insyte, Singapore) was inserted in the left radial artery for continuous monitoring the blood pressure perioperatively. After uneventful insertion, this catheter was secured to the skin with a Tegarderm transparent dressing (3M Health Care, St. Paul, MN, USA). The surgery was performed uneventfully and the endotracheal tube was also weaned at the end of the surgery. 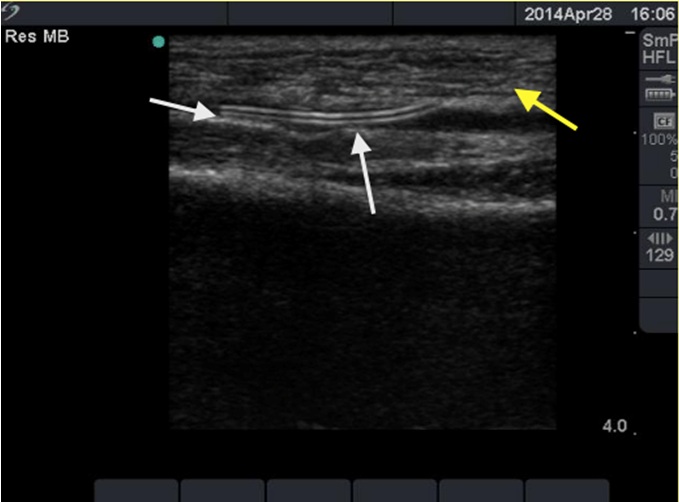 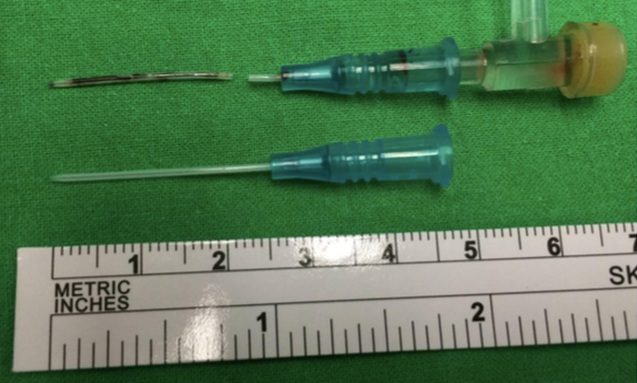 Radial artery cannulation for arterial pressure monitoring is a valuable adjunct for patients receiving anesthesia for complicated and major surgeries and receiving respiratory support in the intensive care unit [2,3]. Damage to this intra-arterial catheter is a rare complication following catheterization [4]. Disruption of the catheter during removal with a residual part retained in the radial artery following a successful placement has been rarely reported [5-9].

It is well known that the intra-arterial fragment may be flowed away by the blood flow and it could be considered that we should explore distally to find the intra-arterial fragment [5]. We needed tools to make sure the correct incision site where we should explore. Several tools has been reported to localize the broken catheter include 3-dimensional Computerized Tomography (CT) [6], ultrasound [7,8] and plain radiography [9]. However, assistance using radiological modalities such as CT and plain radiography is not immediately accessible and cannot be applied intraoperatively and continuously during surgeries in most operation rooms. Even if a residual part of the intra-arterial catheter can be successfully localized by CT or plain radiography outside the operation room, it may be flowed elsewhere when the patients were transported to the operation room to receive surgical explorations. Furthermore, plain radiography only provides a low resolution and is therefore not an optimal modality for localizing the broken catheters [9]. In our patient, due to the arterial blood flow, the broken catheter was apparently moved several times during the exploration procedure before it was finally removed in the deep palmar region. In this case by aid of ultrasound we could quickly and continuously trace the changing positions of the broken catheter, and the surgeon could successfully remove the retained part.

Moody [7] has proposed that ultrasound offers a number of advantages for localizing a broken catheter, as it can provide information about the exact location of the cannula fragment, which minimizes the exploration time and surgical field, and it allows the ability to monitor the fragment in real time.

In this case we proposed another advantage of ultrasound to survey the intravascular foreign body in its continuous monitoring with changing locations. The intra-arterial catheter fragment was continuously transported by blood flow into the distal and deep palmar regions, and was absent in serial explorations in the skin and vessel. Without ultrasound to continuously trace the broken catheter along the artery and its distribution, we could not confirm that distal migration and could not assist the surgeon to find it.

In summary, ultrasound is a valuable and convenient tool to localize the broken catheter fragment that may migrates by the arterial blood flow and is difficult to be localized.

Copyright: © 2016  Chen Kuan Hung, et al. This is an open-access article distributed under the terms of the Creative Commons Attribution License, which permits unrestricted use, distribution, and reproduction in any medium, provided the original author and source are credited.